Blimey! My Mom’s a Pirate, Matey 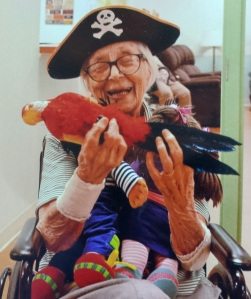 If truth be told, my Mom, is, was and always has been an old salt … the notorious pirate, Cap’n Salty Smirk.

And, from the looks of her salty smirk, she’s right up there with Anne Bonny and Mary Read!

She could carve out a skull and crossbones on the behinds of Johnny Depp and Keith Richards with her cutlass, and ruffle the feathers of her pet parrot, Polly, to boot.

I mean, my 94 year old mom is one mean pirate machine. Wherever she goes, it’s sure to be an adventure waiting to happen.

And, it’s no telling what Cap’n Salty Smirk & Polly’s next adventure will be!

Now It’s Your Turn at the Wheel, Me Hearties!

This is where I’m handing my blog over to you, matey, because I believe this picture of Mom is worth a thousand words … your words, not mine. In fact, I call her picture a treasure chest waiting to be pried open … not just any treasure chest, but the motherload!

So, my challenge is for you to make up a pirate’s tale using Mom’s picture as your inspiration. Give it a beginning, middle and end and then post it as a comment.

Enter the Cap’n Salty Smirk & Polly Contest, and/or pass it along to someone you know is a great tall tale teller.

What are the rules?

There are no rules. After all … we’re pirates!

Yo Ho, my friends I have a tale
Of treasure, plunder, swashbucklin’ and sail
My story’s bigger than a whale
It gets so deep, ye’ll have to bail.

Chorus
I’m Cap’n Salty Smirk! That I be!
I sail me ship upon the sea!
I stay up late – till half past three!
And that’s a peg below me knee!