My Vote’s for Topnotch and Mom 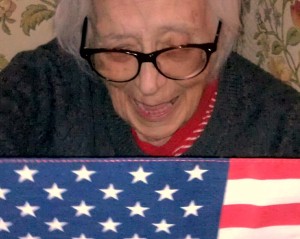 It is amazing when you think that she has voted in 17 general elections and her first vote was for Franklin D. Roosevelt to serve a third term. Her last vote was for Obama four years ago, and when I say last, I mean her last, because she will be sitting this one out.

Even so, I asked her who she would be voting for and she said, without really knowing the candidates’ names, “I am voting for topnotch, whoever that is.” 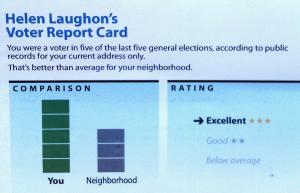 I pulled a postcard addressed to mom out of the mailbox a couple of days ago and proudly showed it to everyone I could. It compares mom’s voting record in the last five general elections with others in her neighborhood, and you can see she received the highest mark.

I wish the organization that sent the postcard would have gone back in the public records far enough to add the other 12 general elections mom voted in. She might have won a trip to Disney World!

So, today, I will be casting my vote in mom’s honor as well as to all of you who consistently exercise your right to vote. As long as you vote, and vote for topnotch, whoever that is, the red, white and blue will continue to fly above all others, it’s a gift of freedom to honor, cherish, protect and behold.

A Side Note: Mom’s home was built in 1796 which means it has been on this earth for every general election since our second president, John Adams! No telling how many votes have been cast from folks who lived in this home. I know mom, dad and my sister, Nel, sure did cast their fair share.

Tom Laughon (Pronounced Lawn) is President of Catch Your Limit, an organization whose sole purpose is to guide and grow leaders. His journey from lead singer in a rock-n-roll band, to a successful career in marketing & advertising to consultant, strategist, keynote speaker, facilitator, professor and writer is a fascinating one. Headquartered in Richmond, Virginia, Tom and his team guide organizations, from start-ups to Fortune 500 companies to national associations, to "catch their limit" in areas such as leadership development, creativity, innovation, teaming and transformational change. His commitment to "practice what he preaches" has made Catch Your Limit a petri dish for round-the-clock discovery and learning. The firm's brand reflects Tom's personal brand: Fun, Inspirational, Strategic & Hot!
View all posts by Tom Laughon »
← What’s HIS Name?
I’ve Got Your Back →